Discover the spontaneous practice that existed in various cities of Tunisia immediately after the fall of Ben Ali in January 2011. Explore the means by which people organized small committees to protect their neighborhoods, offered food and drinks to volunteers of these small committees; the forming of queues that were made to buy bread; or the practice of stopping at traffic lights, even if they were not working. Such acts functioned as social magnets and helped the structuring of a new temporary revolutionary, egalitarian social order. From this we can learn lessons of re-appropriating and reinventing new legitimate means of collective violence, away from state apparatae.

Benoit Challand is currently Associate Professor of Sociology at the New School for Social Research, New York City. His talk is based on interviews conducted during and after the fall of the regime in Tunisia. 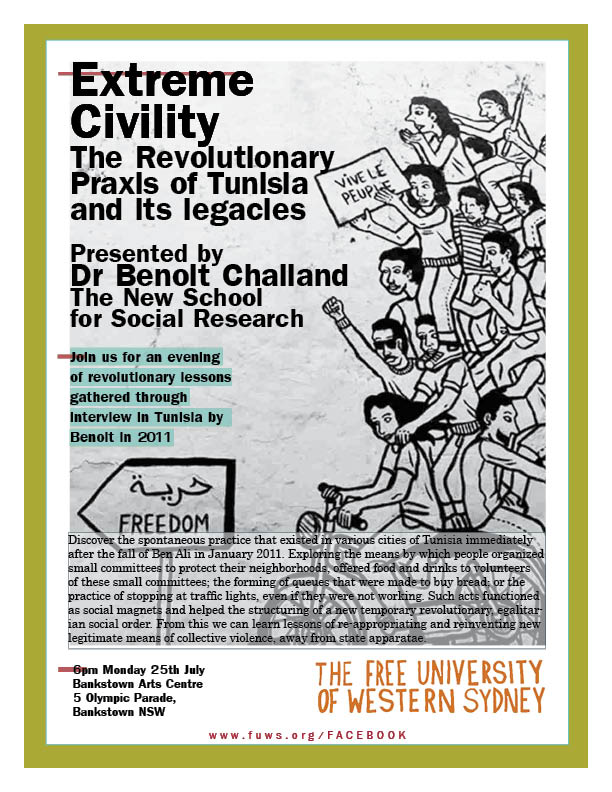 FUWS is a part of worldwide reactions and alternative responses to the university model under neoliberalism, where the orthodoxy of capital governs its function.

"Love and study cannot exist without struggle, and struggle cannot occur solely inside the refuge we call the university." (Robin D.G. Kelley)

FUWS is free and accessible. It remains politically and economically autonomous from political parties and organisations, government, private bodies, universities and NGOs. There is no enrolment, no registration and no fee. You are free to come to any session as you like and as you are, ready for the transformation of free learning.